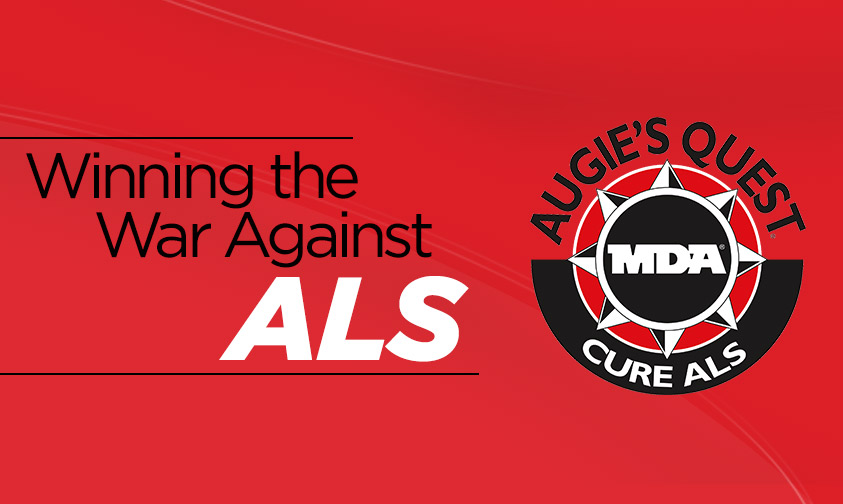 One of my favorite memories from being part of the fitness industry came a few years ago when the CEO of the 23 club chain I worked for tasked me with spear heading a fundraiser for Augie’s Quest. At the time, (this was pre-ALS Water Bucket Challenge,) I had never even heard of Augie’s Quest and I had to research it.

Augie Nieto, one of the co-founders of Life Fitness, a super-active, successful businessman, was stricken with ALS, Lou Gehrig’s Disease. This disease progressively affected the nerves of his spinal cord and brain, like it does other sufferers of the disease. The result is degeneration or death of the neurons that control muscle movement. Early symptoms for Augie and others with ALS include weakening of muscles of the limbs and the muscles needed to breathe, speak and swallow. All of this happens to the muscles with the mind left intact, with complete awareness of the slow descent into lack of independence and probable death. To say that ALS is cruel, is an understatement.

In 2007, Augie and his wife Lynne, began fundraising efforts through their charity Augie’s Quest raising around $44 million to date for the purpose of finding effective treatments for the incurable disease. The generous efforts of not only Augie’s Quest, but clubs across the industry have made it an annual tradition to raise large amounts of money and create awareness for the cause.

Now, how in the world was I going to get the buy in from 23 locations around 5 states to rally for this cause and really give this the full effort it so greatly deserved? Our past fundraising efforts had always fallen flat, never raising more than $2,000 and always taking a back seat to selling memberships. How was I going to do this thing justice while making sure I didn’t take away from the day-to-day business? Oh, and this was all just two weeks before IHRSA.

So, what was the plan?

There was no I, it became an amazing team effort; the VP’s of every department-Sales, Marketing, Personal Training, IT, Maintenance, and Group Fitness met to get their part and made it happen. The result was a company-wide day of Zumba classes, Group Training Sessions, and extra long Cycling classes raising funds for the cause.

Why did they buy in this time? As the word got out that we were having this fundraiser more and more members and employees shared that they had been impacted by ALS. The father of one of the Regional Fitness Managers was battling Lou Gehrig’s, 5 members currently had ALS, and numerous other members had lost family members. It was not just industry thing, it was now a personal thing- we were part of the Quest to Stop ALS.

How did we pull it off?

Being the naturally competitive people they are, the VP’s quickly began one up-ing each other in the best way possible and reached out to anyone and everyone they knew for donations. A $500 pledge here was out done by a $1,000 donation there and before you knew it, the VP’s were calling each other out on conference calls and getting their teams fired up to do the same.

So, you might be wondering, what about membership sales, didn’t they slack? Nope, quite the opposite occurred. Our members were touched by our enthusiasm and if anything it helped show them a new side of us as a company they’d never witnessed before. Two crazy, wonderful weeks later, we had raised just under $30,000, created awareness for ALS and built the platform for making it even bigger the next time.

Erin Gray is Co-Owner and Manager of 865 Fitness. She is a CrossFit L-1 trainer, CrossFit Kids coach, and yoga instructor. She is certified in all nine MOSSA group fitness programs. When she isn't leading CrossFit classes you’ll find her running, or blogging. https://www.facebook.com/erinleighgray865 https://www.instagram.com/e3gray/
See all posts by Erin Gray