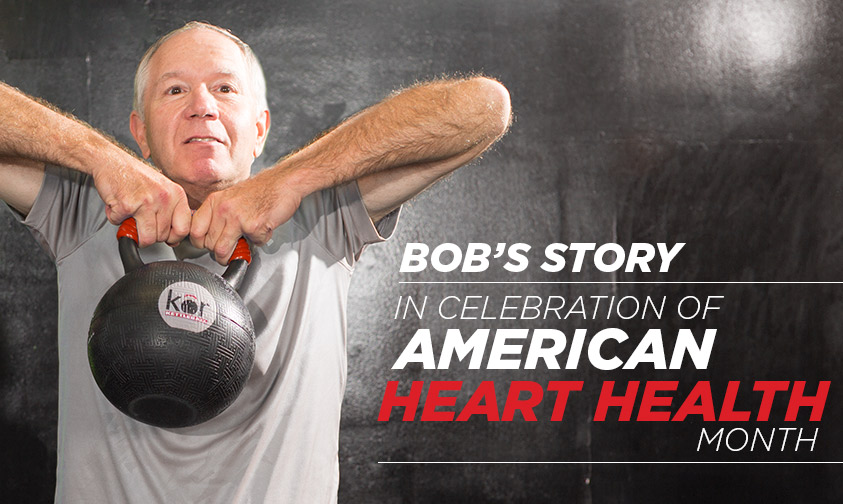 Like many Americans, Bob hadn’t made regular exercise a part of his life. After more than 15 years of inactivity, overweight and in his mid 50’s, Bob was ready to make a change. Luckily, a corporate health initiative made it possible for Bob to make time for exercise.

He started with one day a week mixing cardiovascular training and light strength work. In no time, Bob began adding other modalities including yoga, kickboxing, and weight training. Bob’s choice to make exercise a priority was also the choice that later saved his life.

At a routine annual physical Bob was diagnosed with atrial fibrillation and immediately hospitalized. Though he had experienced no symptoms, his heart capacity had been reduced by 25% and none of the typical medicinal therapies could put his heart back into rhythm. Luckily, since he had been physically active, the 75% heart capacity he still had was strong making him a good candidate for Pulmonary Vein Ablation. This procedure, normally a “routine 5-hour heart procedure” presented some complications due to his genetic heart structure and, as his doctor told him, “could have led to a totally different surgery outcome” had he not had a strong heart.

“Bob is the model I want to be at 58. His endurance and strong heart were all because of his exercise program,” said Bob’s cardiologist. Following the surgery, Bob was no longer at high risk of stroke and has a clean bill of health. His heart has been pumping in rhythm ever since.

In the years since his health scare, Bob, now 62, has continued to make exercise a priority and enjoys pushing himself to get stronger and faster at his newest passion- CrossFit. He has regained that previously lost 25% capacity.

According to Bob, “an active lifestyle has made a world of difference for me. I love that it’s me competing with myself.”

Erin Gray is Co-Owner and Manager of 865 Fitness. She is a CrossFit L-1 trainer, CrossFit Kids coach, and yoga instructor. She is certified in all nine MOSSA group fitness programs. When she isn't leading CrossFit classes you’ll find her running, or blogging. https://www.facebook.com/erinleighgray865 https://www.instagram.com/e3gray/
See all posts by Erin Gray